Every time I sit down to start a blog post I have something negative to say about school.  I feel like such a whiner.  Really, though, this semester isn’t nearly as difficult as last semester.  I think it was just that one frustrating teacher.  I have since learned that neither students nor other professors are very fond of her.  That must be hard.  Regardless, I won’t take her class again.

Unfortunately, I will be seeing Grendel and Beowulf again. Ugh.

Even with better teachers I’m still struggling.  Writing assignments have become particularly difficult, and the thought of staying in school beyond an AA degree leaves me in tears.  I’m supposed to be a writer!  What the heck?!  So I met with my favorite Professor K. for an attitude adjustment.  It worked.  She convinced me that I don’t hate writing, and that eventually a university will pay me to get my MFA with them.  “Just hang in there,” she said.  “It’ll get better, and you won’t regret it.”  She told me to put my fears in her open hands, and then put them in a real jar on a shelf, with a green lid and a label that said Fear Jar.  So that was that.  I don’t know if it was the talk or the jar, but now I can think about moving forward without falling apart.

As of today Jess is 33 weeks along.  I had her at 34 weeks so she’s a little nervous, but the doctor assures her that Ava isn’t going anywhere anytime soon.   She’s happily wriggling around Jess’s insides, throwing an elbow here and a head-butt there, stretching out and making her Mommy very uncomfortable.

A few months ago Daddy found a clothing store throwing out the last of the clearance items that didn’t sell, and rescued some infant t-shirts: 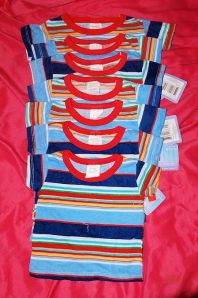 I’m not one to be picky about little girls wearing the “wrong” thing, I’m really not, but this is just ridiculous.  One of these shirts, okay.  But seven?  Come on.  Jess felt the way I did, but she didn’t want to hurt Daddy’s feelings because he was so proud of himself.  *eye roll*

Oma to the rescue.  I got a hold of Linda, who put me in touch with Cheryl, and we hatched a plan.  Look what she did: 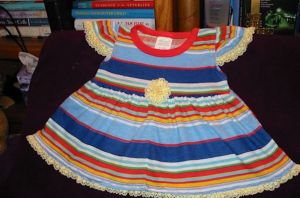 Could you just?  I mean really.  It was supposed to be a surprise but I couldn’t hold it, I had to show Jess.  Squeals and aaaaawwwwws  ensued.  Cheryl  has a few more tricks up her sleeve, so when I get everything back I’ll share the whole project.

And that’s it.  Stay warm and comfy!  Spring is coming, I promise.